As suspected, it’s turned out to be a heck of year for Poinsettia.  Many growers faced Erwinia, others had rooting issues, and all faced significant pressure from Bemisia whitefly from infested cuttings.

As the time approaches for the plants to go out the door, this post covers whitefly control successes/failures in 2018, and what to do with remaining populations.

Whitefly and other poinsettia issues are also being discussed at the Niagara Poinsettia Open House on Tuesday, November 20th. This will take place at Jefferys Greenhouse (Plant II) starting at 10 am.  See the latest issue of Greenhouse Canada Magazine for more information (pg. 28). Hope to see many of you there.

Bios Vs. Chemicals for Whitefly: Who won?

I feel like we’ve played this game a few years in a row now (see this post), with things often coming up a tie.  But the elephant in the room was always that, with chemicals, we could just never tell what the next year was going to bring in terms of resistance.

Well, folks, it’s 2018, and the Elephant has definitely made his presence known.

The data in Figure 1 (below) was collected from a local greenhouse that used whole compartments to compare different pest management programs for whitefly.  Note, all compartments began with a standard dip in BotaniGard and Soap to reduce initial whitefly populations (more info on this here).

Fig. 1. Presence/absence monitoring for whitefly in a Niagara greenhouse.  Anything below 15% infestation is considered a success in mid-October. All data was collected from commercial greenhouse trials courtesy of Graeme Murphy from BioLogical consulting (approx. 10,000 plants per compartment)

As you can see, in the chemical-only compartment, by the time the first pesticides were applied, whitefly had already reached concerning levels.  And this was even with a preventative dip !  (Recall that it’s good practice to delay insecticide application until September to avoid shifting Bemisia population genetics from a mix of “B” and “Q”, to primarily “Q”, which are more insecticide resistant).   However, even once the pesticide applications were made, the whitefly pressure continued to climb (more on this below).  In the biocontrol compartments, however, good whitefly control was achieved regardless of the specific biocontrol program (or the supplier).

Overall, this was the trend we saw across most greenhouses in the Niagara region.  Good whitefly control was generally achieved when parasitoid/predators were put in early (i.e. right at potting), even if growers followed up with pesticides later in the season ( at this point, it’s unclear how much those chemicals helped).  But growers relying strictly on chemicals struggled this year.  This seemed to be true for many of our U.S counterparts as well, even with far more chemical options at their fingertips, and employing a HEAVY chemical rotation (see the Michigan State report here). 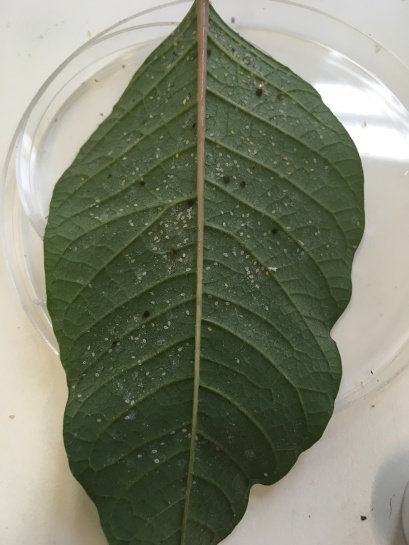 High Bemisia whitefly pressure seen on specific colours in 2018, when a chemical-only approach was used.

Mind your B’s and Qs:

In talking about the “B” versus “Q” biotypes of Bemisia whitefly (also referred to as “MED” and “MEAM1” respectively), it can be easy to forget that “B” also has a history of developing resistance to chemicals.  Just because “Q” tends to be MORE resistant to more classes of chemicals doesn’t mean that having a population of primarily “B” guarantees you a good year. (See this article for some in-depth reading on B and Q and their resistance to chemicals used in poinsettia).

Based on DNA biotype testing of 4 Niagara greenhouses this year (conducted by the US Horticultural Research Lab in Florida) growers  that had either 100% “Q” or 100% “B” biotypes BOTH struggled with chemicals this year.  This suggests wide-spread resistance in all whitefly biotypes, likely due to high exposure to chemicals at the producer end.

Chemicals that failed to control Bemisia whitefly in Ontario for many growers this year included:

Because we don’t have specific testing for chemical resistance available, in the end, knowing whether you have predominately B or Q in your greenhouse might be strictly academic.  What matters is whether you are willing to take the chance that chemicals could fail you in 2019.

As a general rule of thumb, if less than 20% of your plants are infested with low levels of whitefly in early November, nothing needs to be done, as your customers aren’t generally likely to notice these levels. (See this post for more detail on scouting tips etc.).

“Coloured” poinsettias (i.e. anything other than your standard red) generally seem to have greater whitefly numbers, and may require extra measures.

However, this 20% rule may be violated on your farm in specific spots, varieties, or suppliers. For example, we’ve noticed a trend over the years that “colours” (pinks, whites, etc.) tend to have higher whitefly levels in general, which becomes especially noticeable in November.

Given the number and diversity of active ingredients that appear not to be working on Bemisia (whether it be B or Q), I doubt ANY pesticides are an effective option.  Although likely untenable (due to costs or logistics) on significant acreage of reds, the following strategies could help save a bench or two of colours in trouble (but no guarantees at this point): 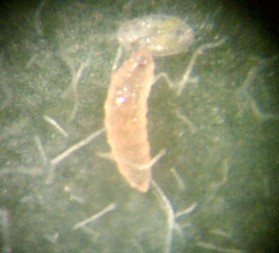 Hopefully more ideas will follow in the comments (I encourage all to post!), and at the Poinsettia Open house on Tuesday.

Also, stay tuned for a post on how lessons from 2018 can help you plan your poinsettia program for 2019.

2 thoughts on “2018 Poinsettia Wrap Up: Whitefly and Pesticides”

I’m looking for information on